Can We Awaken in Time From Madness and Denial? 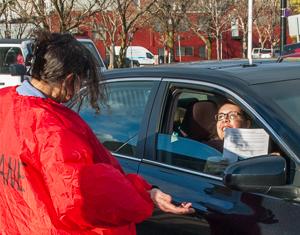 We are sleepwalking to climate catastrophe—can we awaken from this nightmare? On April 16, 19, and 21 we climate activists stood out in Peabody Square to say that a new fossil fuel facilities in the year 2022 is an example of

We were heartened to be joined by Leo and Ryan, juniors at Peabody Memorial High School. They arrived, of their own volition, with signs, wisdom beyond their years, and a deep desire to participate in shaping the world they are walking into. “Oh, yeah, he is my favorite teacher,” one said of his environmental science teacher at the high school. This teacher has been instructing his students not only on the science of the climate crisis, but the energy infrastructure that exacerbates it.  These high school juniors understood profoundly what our municipal light plant doesn’t seem to acknowledge.  “This plant is not the direction forward.”

Yet the Mass Municipal Wholesale Electric Company (MMWEC) has already broken ground for the oil and gas facility, project 2015A, known as the Peabody peaker.  We have protested, collected over 1300 signatures calling for health and safety studies to be conducted, written endlessly to the 14 municipal light plants that have invested in the project, and pressured MMWEC to pivot to a clean, safe, and economical battery storage facility.  The trees have been cut, trenches for new, potentially hazardous infrastructure have been carved out of the earth, and large machinery vibrates throughout the days. This project is a terrible investment of resources and money, that will produce more pollution, green house gasses, and will threaten the safety of the community.

As the world wakes up to the hazards of fossil fuels, our stand-outs represent growing diversity and concern.  People came from Acton, Boston, Everett, Northampton, Danvers, Salem, Marblehead, and Ipswich as well as Peabody.

The young people who attended understand all too well that the world they will inherit is deeply damaged by environmental degradation and the warming caused by the burning of fossil fuels.  They are speaking out.

Listen to us:  No new fossil fuel infrastructure!

On behalf of Breathe Clean North Shore & the Planet: Many thanks to each person who took part. You came from far and near and stood in the sun and in the wind to spread the word. The standout is an example of how we need all hands on deck. High school students who focus on science, and students of theater arts, hunger strikers, story tellers, politicians, community organizers, leaders of faith communities, makers of signs, dedicated activists, disk jockeys and office workers, and ordinary people: we stand together. We are determined, some would say stubborn.

We have already done the difficult stuff, now we're doing what others consider the impossible. We're tilting for, not at, windmills and for other technologies to assure clean, safe, renewable power. But our central task is to overcome a widespread denial of the urgent need to change ourselves, adapt, and work to mitigate the real threat before us. That's why we continue to seek attention and strive to inform and educate to enable people to make informed decisions. We invite you to join us, there is much to do, together.—JH