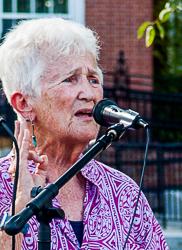 “Boys, you pray for the dead.  You fight like hell for the living.”

Then Mother Jones snatched from the priest’s lap the hat, full of money that they’d paid to use the church hall, and led the miners out of the church into the fields.

If there were a contemporary incarnation of Mother Jones, it would be Pat Gozemba.

Pat grew up in a staunch Irish Catholic home with a father who was the shop steward and a strong union man.  She might have divorced the Catholic Church when Pope Paul VI (1963-78) proclaimed that a woman’s use of birth control was a mortal sin, but that imperative for strong and just moral behavior that her father planted, never stopped resonating.

So, how does that instinct for justice grow a human into a full-fledged and very effective activist?  In Pat’s case, she went to Emmanuel College, and her trajectory might have led her into a quiet life.  However, she took a trip in 1960, journeying from Massachusetts to Florida, where she saw large billboards in North Carolina that proclaimed the joy and power of the KKK (Ku Klux Klan).  Knowing only a little about this infamously racist organization, she decided to do a deep dive, signing up to receive their educational/promotional material.  The KKK viewpoint, combined with her first experience of ‘whites only’ bathrooms, water fountains, and transportation, spawned a new awareness of just how racist this nation is in both its roots and present functioning.  When she returned to Emmanuel from spring break, she was offered an opportunity to attend a workshop on racism.

“That was the first time that I had ever hung out with black people. And what is so crazy about the racism in this country is that we never hang out with each other. That is a horror.”

This led her to her first protests at the big bus companies, calling them out for their racial policies.

Pat’s understanding of our national past has been moving for decades from the cherry tree of George Washington to the abominations of inequality. Beginning in the late 1960s, Pat came to realize that a lot of history needs to be re-visioned.  She was influenced by feminist scholars and how people are marginalized because of their gender, race, sexual orientation, spiritual practice, or any difference. Reading Howard Zinn’s  People’s History of the United States (1980) and Nikole Hannah-Jones’ The 1619 Project (2019) in the New York Times renewed her awareness of how much white, privileged, males have decentered the consequences of our nation’s history of enslavement. She came to see gender, race, class, and other forms of privilege create a society that is profoundly unequal.

“The challenge,” she says, “is to destabilize that inequity wherever it emerges.”

Wanting to grow her relationships and be a serious change agent, Pat went on to teach at Salem State University, where she carried these truths as a beacon to guide her work. Never one to assume she has all the answers, she said

“I started teaching there in ’64. So, by the time, I retired in January of 2002, I had met and learned a lot from my students, and they connected me with other movements.”

Interested in Women’s Studies, she created courses like The Literature of Social Protest in the 60’s. Making professional connections with other professors and students, her networks and activism grew.  In 1979 she attended the first big LGBT march on Washington.  This was a “Pat Gozemba event” because the National Steering Committee mandated gender parity and 25% representation of People of Color. It was the gauntlet thrown down at the feet of US legislators:

“We are here, we are staying, and we demand equal rights.”

Pat has woven this profoundly important cause into the others she champions and lives by.

She continued the work that positive change requires.  In 2000, she began the first Earth Day celebration at Salem State.  This has blossomed into a full week of lectures, demonstrations, and performances attended by the entire North Shore community.

The Salem Power Station was completed on December 7, 1948, initially consisting of two coal-fired generating units; then it grew.  What we didn’t understand about the health hazards of coal back then could fill volumes. Only when upper respiratory disease and breast cancers showed a strong uptick in the area, did some folks take notice and respond by starting HealthLink, committing themselves to shutting down this dirty energy plant.  Pat was on the front line of this 15-year fight.

Today, she is co-chair of SAFE (Salem Alliance for the Environment) advocating for the location of the former coal plant to be used as a launching zone for off-shore wind development. Her tireless work with SAFE has grown both the organization and its connections to like-minded groups working to end gas leaks, advocate for environmental justice, and educate the broader community on climate, energy, environment, and justice.

Upon finding out about 2015a, the Peabody Peaker Plant, Pat of course, went into action.  Salem did not invest in this plant, but its residents, many of whom live in Environmental Justice neighborhoods, would suffer from its spewing particulate matter pollution. Social and environmental justice communities subjected to yet more pollution, danger, and economic strain simply resonates like a slowly growing earthquake in her.  Never mind the contribution to greenhouse gases!  She has offered the resources of SAFE to help stop this plant.

“So Pat, how do you keep all these growing number of people invested and active in these battles for our planet and humanity?”  She replied “John O’Connor said the fun is in the fight.  I try and make the work fun, but I also go to where the people are.”

Those of us waiting for hordes of anonymous humans to join our Facebook fights for justice will remain rather lonely.  Pat knows that if you want to generate interest and investment you go to the Council on Aging, the union hall, the college environmental group, the high school environmental club, the LWV’s meeting.  You go, show an authentic interest in who they are and their issues, and they will do the same for you.  That is how you build a movement.

How does one slight woman maintain her energy and hope?  Well, yes, there are all those people she has inspired to come back again and again and again to fight the good fight.  However, when a respite is needed from that fight Pat Gozemba retreats to the most breathtaking garden you could imagine that surrounds her Salem home.  Over 40 years of planting, weeding, and nurturing made me think ‘she won’t know when she is in heaven, because she has made a slice of it here on earth.’  May it continue to nourish her through the many battles that lay ahead.