What Makes For An Activist? 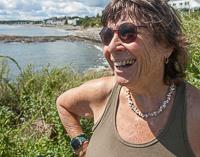 Some people are so self involved that they don’t notice the world around them, except in the ways it touches them.

Some people see a problem, shrug their shoulders and say ‘That is too big! I can’t do anything about it.”

Lynn Nadeau looks at a problem, rubs her hands together, rolls up her sleeves, and says “Let’s get to it, now!”

When one her best friends died at relatively young age from breast cancer, she did not simply attend the funeral, make a donation to the American Cancer Society and go back to teaching math at an area high school. Along with Jane Bright, Lori Ehrlich (now state representative to the legislature for Marblehead, Swampscott, and Lynn), and a few others, she dug into what might have caused a healthy woman to contract a deadly cancer.  Data showed a high rate of cancer in the area of  a coal burning power plant across a small harbor, just upwind of them in Salem MA.

That is when this teacher, mother, and Democrat declared her intention to “clean that plant.” She held meetings in her living room, and HealthLink was born as a nonprofit entity with a mission to “protect public health by reducing and eliminating environmental toxins through education, research and community action.”  Confronting the plant owners, the town, and state protection agencies, she set out to stop the toxic emissions from that plant.  They marched, went to Washington, protested, informed, and eventually 15 years after their campaign began, the Salem Power Plant was closed and sold, the coal burning stopped.  Lead, fly ash, mercury and more from their uncovered waste piles no longer flew across the harbor into local air, water, land, porches, cars and boats which had been covered with soot.

This would be her first venture into environmental activism, but hardly her last.

She went on to persuade the owner of a weed-covered chainlink-fence-surrounded, piece of land by the sea to donate this little area to the public and made a well-used and loved seaside park.   She financed the land transfer with money raised by the sale of 20,000 haggadot—books she created that updated the celebration of Passover to amplify its themes of freedom and justice and to guide the celebration of the Passover Seder. Daily visitors stroll through this beach park and the mini Stonehenge that was erected there for people to experience the procession of the sun over the horizon.

Twenty-five years ago, she worked with others to start the first Earth Day at Salem State University.  Today it has blossomed in a week of workshops, lectures, performances and actions aimed at making this a cleaner, safer world.

“Hey Lynn are you participating in the beach clean-up?”

“Hell no, I am working to make single use plastics illegal, so we won’t need beach clean-ups!”

She worked on changing our legislature’s absence of transparency, continues fighting to get toxins out of our functional world, and serves on many boards. She works on reforming the Massachusetts Legislature's top down rules where members are bossed around by the Speaker, and fights for removal of toxins from our homes and offices, through her service on various boards. Quoting Archimedes, Lynn said, “Give me a place to stand and a lever, and I will move the world. That's my reason for Board work—which is not to make friends, not to gain $ but to have a place for that lever!”

When she found out about the planned Peaker Plant in Peabody ( Project 2015A) and the fact that her town had bought into it, Lynn saw red.  She is outraged that not only is a fossil fuel facility outmoded but it does not meet with Massachusetts environmental laws or climate reality.  She and her allies in Sustainable Marblehead also saw that their Municipal Light Boards had functioned without oversight and it was high time they interfaced with their communities. Her response has been to rouse friends and allies to fight and stop this plant from being built.  She is working with MCAN, Mass Power Forward, JCAN, Sustainable Marblehead, and Breath Clean North Shore, coming at the problem legislatively—demanding clean air standards be enforced, and writing letters to people in a position to shift the direction of the project.  She is exerting pressure on public figures to speak out against the plant, and encouraging like-minded organizations to support this protest and the pivot to clean energy which is so very necessary if we want to back off from the precipice of extinction.

At 80, she sees the future she wants her grandchildren to inherit and works tirelessly to bring that future to fruition.

“If you have a sapling in your hand, and someone should say to you that the Messiah has come, stay and complete the planting, and then go to greet the Messiah.”

Yup, the Messiah might be for her, but the sapling—that’s for those who come after, and Lynn Nadeau will never stop fighting for them.

Please do visit her storytelling web site:   Contact her and watch her Ted Talk: An Antidote to Despair-Storytelling and the Climate Crisis