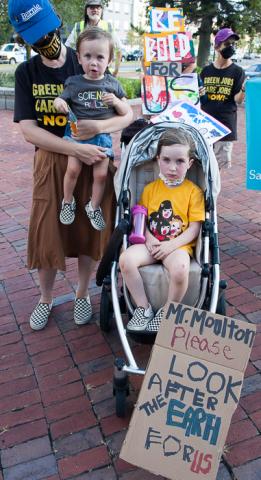 The call came just two weeks before the proposed rally.

“There are only two Massachusetts Congressmen who are still on the fence about the Budget Reconciliation Bill, and one is in your district.  We would like you to be part of a national day of lobbying and rallies to bring these Congressmen with us, The Green New Deal Coalition.”

They’d contacted the 350Mass legislative organizer, Cabell Aimes, and she in turn got in touch with our north of Boston and North Shore crew.

We all understood how important this package was.  3.5 trillion dollars to address climate, jobs, justice, and other issues.  We were in.  Now all we had to do was contact allies, promote, call the Mouton office and see if we could get buy-in, create a march route, clear it with local Salem police, find speakers and a MC, music, sound systems, marshals, new chants and printouts. Piece of cake.  Luckily signage, and a good deal of promotion, was being taken care of by the National Green New Deal office. This is why you have a team!

The 24th of August rolled around very quickly, and as we all arrived to set up at our start spot, Charlotte Forten Park, and also set up where the rally would take place, at Reilly Plaza, across from the Post Office. We hoped enough people would arrive to make the action impactful.

They came. Elders, mothers with children, local activists, members of the League of Women Voters, and many others filled the park.  The most exciting part of this type of action is meeting the folks you don’t know, hearing why they came, and creating relationship.

We headed out from the park, making a little  U so that we could pass before Seth Moulton’s office, waving, chanting, encouraging.  My favorite chant:

Don’t Make Us Storm The Bastille,
Pass it now, The Green New Deal.

We were joined by Congressman Moulton’s point person for transportation, Norman Abbott, who spoke at the rally, describing the high speed rail bill that the Congressman is championing and assuring the crowd that he was indeed, all in on this budget bill.

We heard an impassioned speech from local SUNRISE youth organizer Lilly Worthley, and rose to join our voices and hearts with Roger Rosen and Patty Brayden,  the Climate Singers.

Luis Madina from SEIU 32 BJ, a union that represents more immigrants and front line workers than any other, addressed us in his native Spanish and was interpreted by Dalida Rocha; and the program was rounded out by local activists, Jim Mulloy for 350MASS, Pat Gozomba of SAFE (Salem Alliance for the Environment), Jeff Cohen active in many aspects of Salem governance and now running to represent Ward 5, and Peter Doherty, a humanities teacher at the Saltonstall School and proud member of Democratic Socialists of America (DSA).  Peter painted an image.  He had recently taken his two young children to the beach on what traditionally would have been a perfect day for playing in the sand, except for the dense clouds of pollutants rolling in from the west coast wildfires.  It was those clouds and all they represented that make this bill so deeply important.

As Peter was speaking, a gent sidled up next to the MC (me) and showed a news report that had just come in.

They say timing is what makes a great comedian.  It is also timing that allows a rally to sink or rise up and be effective.  When I approached the mic to end the day:

“My friends, I was going to regale you with a story, but have just been alerted that there is a much better button for closure today.  The United States House of Representative just passed the full 3.5 trillion dollar budget.”

Everyone erupted with applause and hope, that thing that Pandora left in her box.  Now on to the Senate.