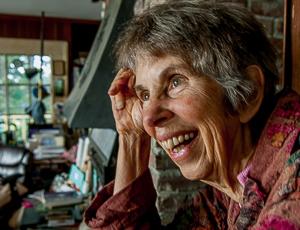 When we stepped into ‘activist central,’ aka, the Hull home of Judeth Van Hamm, her computer sat on a desk, layers deep with books, articles, papers, art that echoed out into a fully utilized office/living room. Her abundant personal library features books on spirituality sitting next to those on Urban Planning, Solar Transit, and Biodiversity. Judeth is a dedicated climate activist who never separates the physical from the metaphysical, and she is determined to change this world for the better.

Far from a silent participant or mere tinkerer in positive change, Judeth:

An anecdote: Five years ago, while working with friends to develop what would become Sustainable Marblehead, I opened a public meeting with an exercise from Joanna Macys’ The Work That Reconnects. It involved quietly looking into someone’s eyes and seeing what caused them sorrow and what gave them hope. At the end of the meeting, I was told

"Don’t ever do that touchy-feely, spiritual stuff again."

I left that part of myself, sad that there was not room for all our parts in this important environmental movement.

Then enters Judeth Van Hamm. When asked “How do you choose the projects that you inevitably give your life to?” She replied that,

“They must ignite my head, heart, and spirit. I want to get the world saved.”

And she is doing her tenacious best, one project at a time.

When Judeth first moved to Hull, she saw that it was quite different from her familial home of Grosse Pointe, Michigan. And she came to deeply appreciate all the unique qualities of her new, ocean-bound peninsula. Between 550 and 570 million years ago, this area—then located near the South Pole—was created by volcanic activity. An initial layer, from quickly cooling lava, was topped by “pillow" lava formations, rocks formed from volcanic ash. Over the course of time the volcanic rock migrated to what is now northwest Africa as part of the super-continent Pangaea. When Pangaea broke up, Hull’s volcanic rock moved across what became the Atlantic Ocean to here. Excitedly, she explains,

“Because of this birth, we have five distinct eco-systems in Hull's Weir River Woods. Roots can dig into vernal pools, and glasswort is nurtured by the marshes’ salt water.”

Whether it is infusing fifth graders with her passion for biodiversity or presenting and endlessly advocating for Solar Mobility—a transportation system running on solar energy—Judeth Van Hamm throws her entire self, body and soul into the work.

She began her adult life studying architecture for five years, at the University of Michigan. When she worked for The Boston Redevelopment Authority she said,

Bringing her work to the town in which she now lives, enabled her to be the spinach and arugula base of that salad. When she moved to Hull in 1971, she said that the town was made up primarily of working class folks and the town leaders were continually looking for ways to draw people, investment, and interest to Hull. Judeth noticed that Fort Revere, a World War I and II site with fabulous views, had been left in a state of disuse on Telegraph Hill, which got its name as a signaling station alerting Boston merchants of ships entering Boston Harbor. Earlier, Telegraph Hill had been the site of Fort Independence during the Revolutionary War. She worked to reinvigorate this site, finally getting it listed on the National Historic Register in 1975, and expanding its uses for outdoor cultural events including concerts, plays, military reenactments, and much more. The Park combines history, scenic beauty, and recreation all in one setting. This was Judeth’s vision, and she made it a reality.

She went on, in 1978, to start the Hull Lifesaving Museum. Because of the rock formations near the peninsula, the waters around Hull were the site of multiple Boston Harbor shipwrecks, many with fascinating histories. Please, banish from your minds a dull barn with conventional glass cases showing a mini-ship on a rock and staid descriptions of each shipwreck. This was a Judeth Van Hamm project!

The main floor of the Museum looks as it did during its time as the Point Allerton US Lifesaving Station, complete with the surfboat- lifeboat designed by Joshua James' brother Samuel James; breeches buoy rescue equipment; Station Keeper Joshua James' office-bedroom; and the crew's dining room and kitchen.

The Hull Lifesaving Museum is much more than a museum. It is an essential part of the community that for 42 years has provided not only crucial lessons from our maritime heritage, but also life-changing and sometimes life-saving youth development experiences. It has grown into one of the areas primary cultural institutions and an agent of social change. It offers year-round education and recreation rowing programs, serving a diverse constituency, three-quarters of whom are under-served youth from metropolitan Boston.

Judeth and those who worked with her are big proponents of hands-on learning.
For years Judeth ran a camp at the Hull Life Saving Museum and then from her back porch and has given estuary tours to fifth graders. Just thinking about these brings a huge smile, lighting up her face.

She explains that when you are standing there, touching, smelling, looking with an attuned eye, the learning stays in your bones. Then she takes them to view the inner workings of a wind turbine, so they can experience the power and possibilities of renewable energy.

When asked about changes to the natural landscape over the past 20 years, a cloud passes over that brilliant smile. It becomes clear that her love and endless awe of our natural world has nurtured her activism to try and protect it.

Her passion and advocacy for non-emitting transit was born in a number of factors.

The first being the lack of a conventional car!

“Most people don’t think about what it’s like to not have a car.”

The other factors were social and environmental.

“A four-lane entrance road was built to service access to Paragon Park. The speed limit on the road was 65 MPH. The lights and crosswalks for human use were few and far between. One day I saw a young boy, yearning to cross, far from the two lights and the only thing to do was dodge speeding cars! This was car-centric craziness.”

Judeth, unlike most of us, does not shake her head sadly and walk away. She found three electric trolleys that could travel a consistent circuit, picking people up and safely depositing them on the other side. Sadly, the potential ridership would not pay for the drivers and maintenance, so she enlarged her vision.

Enter Solar Mobility. The world’s first driverless, solar-powered zero-emission mass transit technology comprised of autonomous electric ‘pods’ that are capable of traveling with motorized wheels in an overhead rail. The rails fork at stations, so pods can move off the main rail and stop to drop off and pick up passengers, and so through-traveling pods are not slowed by the stops and starts of other pods. With the new computer-controlled pods that can travel fast close together, each rail can handle as much traffic as six-lanes on a highway and journeys that used to take hours in traffic or on various modes of land based transit, would now cover 35 miles or more in an hour, not put emissions into the atmosphere, and provide lateral transit in areas where all trains now only go in and out of major cities. Solar Mobility Song

Though the companies that promote and would build this system are private, they would interface with the public transit systems we have in place. She has advocated for funding for over 15 years and is delighted that the most recent Massachusetts Transportation Bond Bill includes $1.3 million to help the Dept. of Energy and Environmental Affairs launch Solar Mobility.

The Peabody Peaker Plant simply made her more grounded in her activism. Even though Hull is one of the municipal light plants to invest in 2015A, she is determined to see her beloved town pull out of this ruinous contract.

“The peaker plant no longer makes economic sense. There are new ways coming along to generate power along with large batteries for storage. We also don’t have time. We are way over the 350 PPM (parts per million of carbon determined to be a safe planetary level). My town will be underwater! There are new, better ways, to provide energy.”

She is working with students at the high school to evaluate how much energy could be accumulated from installing solar panels on the school roof, and has engaged their Green Team to line out where personal solar personal rapid transit could be installed.

The Hull Light Plant has secured a federal grant to help test an underwater tidal electricity generator in the narrow channel between the end of the Hull peninsula and nearby Peddocks Island.

As president of Sustainable South Shore, a Mass Climate Action Network chapter, and co-chair of the South Shore node of 350 Massachusetts, she is working with people in the South shore communities as well as advocating for each town to adopt a Climate Emergency Declaration as a step toward achieving 100% clean energy fast.

One honestly wonders when she sleeps.

As we are preparing to leave, both of us note the fine art, framed and hanging on the walls. It turns out, she created that as well! From a detailed pencil architecture-style rendering titled The Protector of a young girl sitting in a giant chair embraced by a maple tree outside the windows to a stunning interpretive watercolor of flowers, their beauty resonates; her art is as skilled and varied as her advocacy.

Judeth shared the meaning of the pencil drawing:

It is about the spirit of the tree and me. If you look at the pattern in the chair you might be able to see the cat-like face of the spirit of the Protector tree. The carpet and chair are similar to ones in my grandparents' home where we lived after my dad passed on. I loved climbing trees as a child and have a special affection for the tree in the picture.

Why doesn’t she lose spirit and energy when the road is so long? As we prepare to leave, Judeth hands us each a postcard. She asks us if we believe in the power of positive thoughts, and if we do, to join in the Positive Thoughts Climate Strategy by repeating this phrase many times a day:

“I am grateful for a peaceful Earth with a healthy climate, clean air and clean water, and all its species.”

It is this spiritual backbone that keeps her upright, shining, and endlessly working.