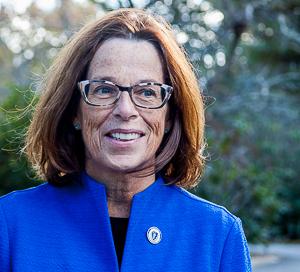 “My grandfather was the first Democrat ever elected to represent Danvers in our State legislature. My parents, from starting the Chess Club at the YMCA, to being president of the Little League, to the Democratic Town Committee, were always involved in the betterment of the town. I guess being civic minded runs in my DNA.”

And when you take a look at what Sally Kerans has been up to, lo! these last 40 years, you will have to agree.  From 1991-1997 she represented the 13th Essex District consisting of Danvers, part of Peabody, and Middleton in the Massachusetts House of Representatives (Yes, you are reading that correctly.  She is now in her fourth tour of duty and was the first woman to represent Danvers.)

She stepped away from the legislature to help her aging parents and raise a family with her husband, Michael Whouley, but she hardly retired from public life. Here is the short list of her roles:

Thinking that her children were sick and tired of being dragged around to meetings, rallies, and community gatherings, (despite the promise of Dunkin’ Munchkins), and even though they are both now in college, she was a little hesitant to broach the idea of running again for the House.  However, when she brought it up:

“My daughter was excited.  My son was jazzed, and my husband, who had handled field operations for Al Gore’s presidential campaign, volunteered for the election committee.  This was all good, since I had already arranged to go in and pick up nomination papers!”

As we sat outside the Peabody Institute Library of Danvers on a colorful, windy, October afternoon, her smile was a warm one of remembrance.

“My parents and I walked right down Sylvan Street protesting the Vietnam War on a day just like today.” Yup, Sally Kerans grew up in working class Danvers.

With glee, she recalls:

“When my dad was selling tractors, we got to go the Topsfield Fair every single day because he was an exhibitor.  Then he was a restaurant manager at the Village Green.  It was right down the street from Lenny’s on the Turnpike, and I grew up steeped in jazz.”

But her memories also extend to politics.

“When I was 12 or 13, my parents supported Jack King's campaign for state representative.  King was marvelous, working with Barney Frank, Jim Segel, and some other really progressive voices, all at the height of the Watergate scandal and the Vietnam War.  This was the soundtrack of my youth.”

A legislator with the hindsight to see where we have been and have a vision for where we need to go is rare. One of  Representative Sally Kerans’ gifts is the way she integrates what she has learned: MPA from the JFK School of Government, Harvard University; from serving previous terms in the legislature; her life experiences; and her clear visions for the future. The issues she champions are far and wide, but all reflect that integration.

“The first Washington, DC march that I ever participated in was for women’s rights to abortion.  I never would have believed it if you’d told me that in 2021 states would be outlawing it, and banning them would once again become a federal issue.”

She worked for Representative Larry Alexander from 1983, just after his bottle bill passed, requiring containers of carbonated beverages to be returnable with a minimum return value of $0.05.

“This bill has not been updated in over 35 years!  It must be expanded.”

She helped to establish a day in Danvers to honor Martin Luther King.  Sally had always hoped that this would evolve into an event that honored hard fought equal rights from a nation that now held every one of its citizens in its loving palm.

“Then Trayvon Martin (17 year old high school student) was shot and killed, and George Floyd was suffocated and killed, and and and…  We must address structural racism.”

“The gulf between rich and poor continues to grow wider, and wider.  The ratio of household income to college tuition, is an absurdity for the largest part of our state population. Most students are terribly burdened by college debt, limiting their post-college choices.”

When people ask Sally “Are you a liberal?”  She answers,

“I want every kid to have an education.  If that means I'm a liberal…OK.”

Sally Kerans, is committed to collaborative work as a legislator.

“I think our legislature is doing spectacular work, and I respect and want to work with many of these people, most especially Michele Ciccolo, Joan Meschino, and Lori Ehrlich.”

As we talked about climate and environmental imperatives and how these interface with building-related emissions, she recalled:

“When I had work done on our home, one thing really struck me.  Not one contractor, plumber, or electrical engineer suggested that if I wanted a green option, they could have the work done a certain way, using alternative products or techniques.  All they thought about was the cheapest way to do the work. ‘Am I really going to bother to insulate all my pipes, when it’s just going to cost me a few more pennies on my bill?’ That is not what it’s about.  It’s about conserving, and reducing emissions.”

We then spoke about bill H.3365 192nd (Current) An Act providing for building justice with jobs and S.2226, bills that would put thousands to work retrofitting one million homes over the next 10 years. These bills could create the homes she was thinking about when her contractor did not offer the option!

Representative Kerans’ heightened awareness is balanced with the realities of serving in the state house and the many pressures directed at legislators.

During a session of the house, another representative, apparently trying to steer Kerans away from away from her opposition to the Peabody peaker plant—what they saw as a political error—arranged to introduce her to a lobbyist as someone who “knows a lot about it.”

“The industry and business sector pushed really hard against strict regulations, which was one of the reasons that Governor Baker vetoed the climate bill (The Next Generation Roadmap Bill), not just once, but twice.”

She sees that this road is going to be a long one, while understanding the irony that we don’t have much time to de-carbonize our world. While Representative Kerans is thrilled about the off-shore wind initiative coming out of neighboring Salem, her other neighbor, Peabody, is slipping backward in its clean energy initiatives.

The proposed Peabody peaker plant, an $85 million gas/oil facility, financed with up to $85 million with the option to refinance for $85 million, has been sited, literally, in Danvers’ back yard on the Waters River facility.  Between hazardous particulate matter, new, and inevitably leaky, fossil fuel infrastructure, a potentially dangerous compressor, and yet more emissions added to greenhouse gasses, she was appalled that no one in her town government had been apprised of the project.

Once she understood what was at stake, Representative Kerans entered the fray to try and influence the Massachusetts Municipal Wholesale Energy Company (MMWEC), the designer of the peaker plant project, that develops and manages energy sources for some municipal light plants, to pivot away from this fossil-fuel model and invest in renewables and battery storage facilities.

When Kerans wrote to Environmental Affairs Secretary Katie Theoharides and appealed for a serious health and safety study of the proposed plant, she was met with resistance.  Theoharides told her that the Department of Public Utilities hearing would only address funding, despite the fact that her office is responsible to safeguard Massachusetts from the impacts of climate change and to reduce greenhouse gas emissions.

I do think MMWEC was in the driver's seat and the Peabody Municipal Light Plant (PMLP) was along for the ride, and they didn't explore renewables. I think they gave PMLP only the information that put the plant in a positive light. And when the governor and his entire administration buys into something  you are really working against the wind.”

As someone who works with large budgets, she understands finance.

“We are not just looking at an $85 million plant that flies in the face of the Next Generation Roadmap bill.  Unspoken and uncalculated is the $5 million in negative health impacts annually.”

Much of that negative impact will be seen at Mass General Hospital, Danvers, ironically a stones throw from the proposed peaker site.

She sees light commissioners as too dependent on MMWEC, and a state government that has bought into their ‘strategic mission.’

“Their talk about green hydrogen is just a red herring, to keep towns invested in them.”

She sees that municipal light plants (MLPs) must have options that respect and actively support our Next Generation Roadmap.

She sees that our state government has a once in a lifetime opportunity, here and now.

“We have a $500 million surplus from federal pandemic aid.  We need to appropriate that money within 4 years and use it within 6, and with it we must address many of the systemic problems we have been discussing.”

I asked Representative Kerans if it was difficult working from home for all these months.  She missed being in the State House, and noted that what happens in hallways between meetings was always as important as what went on in formal sessions.

“The one good thing about voting from my home phone is that I see the people I represent driving, biking, and walking by.  It reminds me; these are the people who have entrusted me to make this vote for them.”

Sally Kerans truly is a legislator who acts for the people.