The Dark Side, Free Markets, and Community Abuse 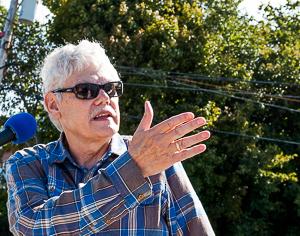 Pearson delivered these remarks at a rally at the Danversport Bridge on September 27, 2022.

We recognize that things and people have good and bad sides, and the bad is often in conflict with the good.

The signs are everywhere that global warming through burning fossil fuels is destroying life as we know it. Look at the darkness created by Hurricane Fiona and Hurricane Ian in Puerto Rico, Newfoundland, and Canada.

How is this dark side playing out in New England, here on the North Shore? The NE electric power grid is run by an agency, created by the U.S. Congress in the 1990s, called the Independent System Operator–ISO-NE. It runs the day-to-day electric grid that keeps all of New England lit up and it controls who provides power to the grid. The dark side of ISO is it is controlled by the people with roots in the natural gas industry who own and operate natural gas power plants including the utilities (such as National Grid), and municipal power companies, which are run mostly by local people

The people who run these organizations look to the past, to the good days of fossil fuels, because those days made them rich and made their companies rich. For them, fossil fuels mean nice houses, pensions, vacations in Europe, and children in private schools. So, they tell ISO to hold onto those old days and to ignore the coming of the fossil fuel dark side.

The Myth of the Free Market in Energy

ISO-NE follows their wishes by constantly talking about two myths. First, ISO says repeatedly that it operates a free market for energy providers. It says we should follow the unbiased results of the free market in deciding who provides us with electric energy. But that is a lie–every economist knows that the most basic part of a free market is the open entry of new producers into the market. For example, at a Farmer’s Market any food producer can participate, and every booth competes with other booths for customers.

ISO doesn’t operate a free market like that. Instead, it creates rules about who gets to produce electricity–rules that prevent solar and wind power and battery storage from providing us with electricity. Why? If they let these less expensive, cleaner sources of energy move into the market, then natural gas power plants would have to close–meaning the end of the good days for those fossil fuel men who are the power behind ISO.

This claim, that natural gas is the choice of the energy markets, is persuasive because it piggybacks onto one of the great myths that influence the way Americans think–that we are the home of the Free Market–so energy chosen by the market must be good. This myth is a powerful tool for convincing state government officials to do things from the past, like approve the foolish power plant being built in Peabody.

Peaker Plants and the Myth of Reliability

People who are not gazing into the past know that combining solar and wind power means most electric needs are covered and keeping some gas plants for occasional peaker duty [at times of very high need for electricity] would handle any gaps. We also know that peak usage hours are usually only four or five hours long, a time easily covered by today’s batteries which are steadily improving. Batteries showed their worth during the California energy squeeze in August.

What is the result of ISO’s bogus reliability claims? For fossil fuel supporters, the only reliable fuel is natural gas. This myth is another powerful tool for convincing state government officials to keep doing things from the past. ISO and all the other people tied to the fossil fuel past use the Reliability Myth as a weapon–no state or local agency wants to be responsible for letting the lights go out–so they approve stupid projects like the Peabody peaker plant.

We need to fight the dark side of the end of the fossil fuel era–natural gas is not a superior fuel; it only wins when fossil fuel people use their power to rig the rules. Natural gas is not more reliable, solar, wind & batteries are the energy of the future. Fight the Dark Side.