Within the context of emissions monitoring, I want to return to the point of cumulative impact. This facility is being built on the same site as two existing peaking power plants—two plants that have been polluting surrounding neighborhoods for decades with serious impacts. Preliminary studies have shown that census tracts around the Waters River site have significantly higher levels of pulmonary disease, cardiac issues, cancer, and other illnesses than other parts of the city and the state. This new facility cannot be considered in a vacuum: it will be piling on top of existing emissions and generations of environmental racism and harm. 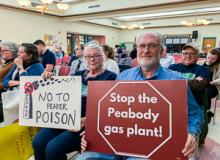 The burden that neighboring communities are already facing is clear.  Do not further exacerbate these impacts.  The Peabody Peaker project should not be permitted to move forward especially if no community health impact assessment is conducted.  Instead of adding to the burden of the community, we should be reducing it. The city of Peabody and the PMLP should look to retire not one, but both of the existing facilities that are currently polluting and harming affected neighborhoods.

There are many well-documented health concerns associated with fossil fuel-burning power plants.